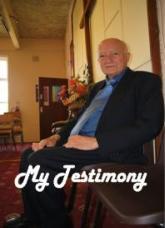 I became a committed Christian in 1983 at the age of 45 I had a belief in God for many years but was of the opinion that until 1983 all roads led to God. That included spiritualism for which a member of my family had been involved for 40 years holding séances at the family home.

After leaving this place following the death of my relatives I become under great spiritual attack culminating in a curse being placed on me from the occult. (this was lifted after I had become a committed Christian)
A good friend said to me, “You have experienced the spirits, now you need the Holy Spirit” I put my trust in Jesus Christ as my personal saviour in early 1983 and was baptised in the September of that year.

The following year I collapsed in Reading and was taken to Reading Hospitals. After tests it was found that my left kidney had become greatly enlarged. The kidney which weighed 7 lbs was then removed on the following week Friday. On the Sunday after tests it was discovered that my legs had become paralysed. Then after 3 days of prayers to Lord Jesus Christ a slight movement returned to one of my toes. A few weeks later I was able to begin walking again.

When I returned for a further operation a doctor told me that they thought I would not walk again. They had planned to tell the other patients about my condition before they had expected to be permanent before they told me Sometime later my remaining kidney also became diseased. However after more prayers to the Lord Jesus Christ between the growths being identified and the operation, the kidney was found to have been completely healed. The kidney is still working well.

I have received forgiveness for my many sins. I have found friendship with many believers.
I have found a great Saviour